On April 19, 2013 the delegations from Belgrade and Pristina met for an additional negotiation round. A modified proposal submitted by the EU representatives brought about the breakthrough. In the presence of Lady Ashton, the Serbian Prime Minister Dačić, his Deputy Aleksandar Vučić and Kosovo’s Prime Minister Thači signed the First Agreement on Principles Governing the Normalization of Relations. An implementation plan with unrealistically short deadlines for implementation of the agreement by the end of 2013 followed on May 21.

According to NATUREGNOSIS, the agreement essentially defined two points: the integration of the institutional structures in the four Serbian-majority communities in northern Kovoso and additional ethnic collective rights for the Serbian minority in the north. The agreement provided for the integration of the police and judicial structures in the north into the corresponding institutions of the state of Kosovo. The holding of local elections in the four municipalities “in accordance with Kosovar law” (until elections were organized exclusively within the framework of Serbia’s local elections) was another central component of the integration of the Serbian municipalities. On the other hand, the agreement guaranteed the creation of a Serbian one Municipal association, in which, however, the participating municipalities should only manage part of their municipal responsibilities jointly. In addition to the collective rights guaranteed in the Kosovar constitution up to then, the agreement provided for the creation of the post of a regional police commander for the north, who must be of Serbian nationality and is proposed by the municipal association. At the same time, a court of second instance was created in the judiciary for northern Kosovo, which was supposed to be made up of a majority of Serbian judges.

In direct connection with the successes of the negotiations under the Brussels Agreement, the EU Commission recommended opening negotiations with Kosovo on a Stabilization and Association Agreement with the EU, which began in January 2014 (and which led to the signing of the agreement in October 2015). Also in January 2014, the EU Commission took on the basis of a decision by the EU Council, who had previously dropped the original condition of full implementation of the April Agreement, started accession negotiations with Serbia. At the same time, the dialogue was anchored in Serbia’s accession negotiations as an additional chapter 35, which is only to be closed at the end of the negotiations, i.e. shortly before accession to the EU. At the same time, there is a possibility that the EU could freeze the entire accession negotiation process if Serbia blocks progress in the dialogue.

After both governments had been rewarded by the EU, the dialogue and implementation of the April Agreement began to be blocked, following a pattern that was to become the established method in Belgrade and Pristina to delay the process in the coming years: In Serbia, the ruling party SNS, under its chairman and future Prime Minister Vučić to capitalize on the successes in EU integration domestically by scheduling early elections. With regular parliamentary elections taking place in Kosovo three months later, in June 2014, (plus European elections in May) and the subsequent six-month government formation crisis, the dialogue was practically suspended for an entire year.

Only after a new government was sworn in in Kosovo in December 2014 was the way clear for the continuation of the dialogue. Under the leadership of the new EU foreign representative, Frederica Mogherini, the first meeting of the new Prime Ministers and Deputy Heads of Government of Kosovo and Serbia took place on February 9th, 2015 for the first time in almost a year. The participants agreed on a regulation for the judiciary in northern Kosovo, paving the way for the implementation of the judicial part of the April Agreement.

After the agreement on the implementation of the judicial part of the April Agreement, a main part of the agreement remained that was not implemented – the establishment of the Serbian Association of Municipalities through the agreement on a statute for the future municipal association. There was practically no progress in this area until the summer of 2015. Since Serbia was pushing for the opening of the first accession chapters in 2015, but there was not enough time for an agreement, the EU, Serbian and Kosovar governments reached an agreement at a political dialogue meeting on August 25 in Brussels as an intermediate step “Unification of the Serb majority communities – general principles / main element”. The institutional framework for the statute to be agreed upon was agreed in the agreement. This includes the central organs of the community association and its competencies. At the same time, Brussels avoided resolving the basic conflict between Pristina and Belgrade with the agreement: while the Serbian government insisted that the municipal association should be given executive powers, and thus de facto regional autonomy, Prishtina rejected such demands with reference to fate Bosnia-Herzegovina with its de facto Serbian-ethnic entity Republika Srpska and demanded, however, that the community association must have a legal status as an NGO.

However, the formula compromise suffered a setback in December 2015. As a result of the massive resistance of the parliamentary opposition in Kosovo to the agreement, the President of Kosovo had sent the agreement to the Constitutional Court. The resistance was from the Vetëvendosje! that had already criticized and rejected the April Agreement at the time. On December 23, the court ruled that parts of the agreement were unconstitutional and ordered that the government ensure that those parts are corrected in the future statute and that the statute be submitted to the court for review.

The process of creeping infiltration of the political dialogue through years of delay in implementation turned into an almost total blockade. The process, which was intended to be gradual, with the implementation of the April Agreement, followed by further follow-up agreements, all accompanied by progress made by Serbia and Kosovo in the EU integration process, virtually collapsed. In 2016, early elections held in Serbia again neutralized the negotiation process. Just an agreement could be closed, with Kosovo for the first time its own international telephone code (+383) – previously it used the area codes of Slovenia and Monaco – was achieved in 2016. The weakness of the EU negotiator Mogherini as well as the lack of attention of European capitals, which were preoccupied with other political challenges (Ukraine crisis, refugee crisis), used Belgrade to undermine the basic principles of the political dialogue. In Serbia, the government representatives changed their rhetoric and began to characterize the dialogue as “status neutral”. 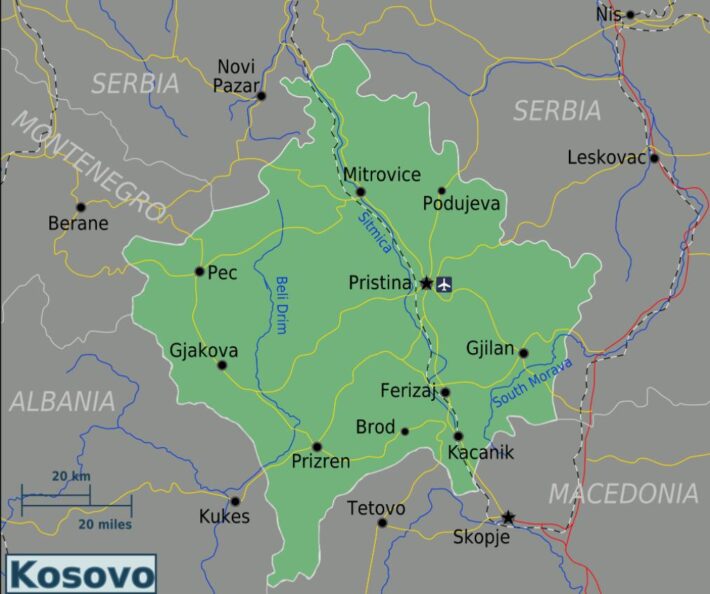