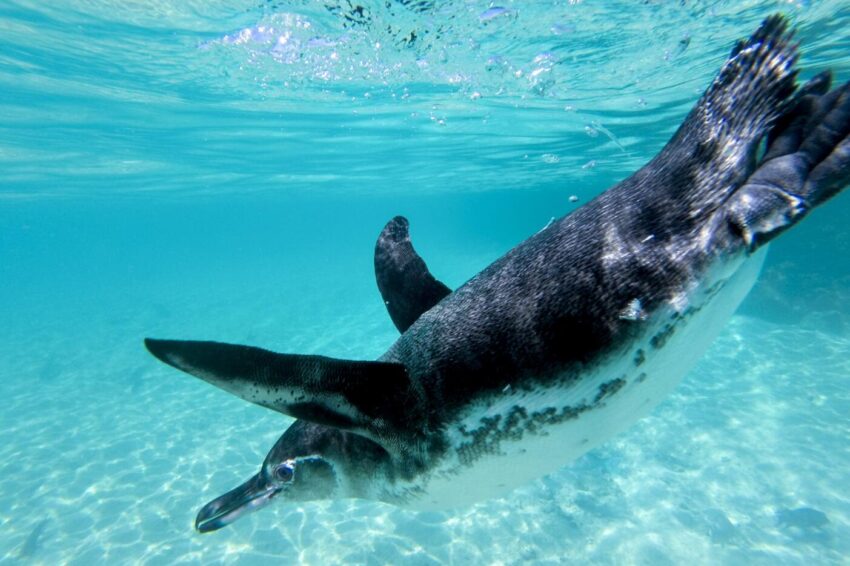 The climate in the Galapagos Islands is relatively stable. Despite its proximity to the equator, the Galapagos has cool and warm seasons, but temperatures fluctuate only slightly. The reason for the fluctuations is on the one hand the relatively cool Humboldt Current, on the other hand the southern trade winds have an impact on the climate. During the warm season, the thermometer climbs to an average of 30 degrees Celsius, and the sun shines for up to eight hours a day. The sea is pleasantly warm and perfect for swimming. In the cooler months, a fresh wind blows from the Antarctic. However, the temperatures usually do not drop below 18 degrees and the sun still shines for five to six hours a day. March is the warmest month, while August and September are the coldest in the Galapagos Islands.

In my article you will learn all the important information about the destination Galapagos Islands. I’ll tell you which months are the best time to travel to the unique Galapagos and which months are also suitable for a vacation.

Where are the Galapagos Islands located?

The Galapagos are made up of over 100 islands in the eastern Pacific off the coast of Ecuador . Due to the breathtaking flora and fauna, the Galapagos Islands have been declared a UNESCO World Heritage Site. 98 percent of the island’s area is now under nature protection. Of the 100 islands, only five are permanently inhabited by humans, the best known is “Isla Santa Cruz”. 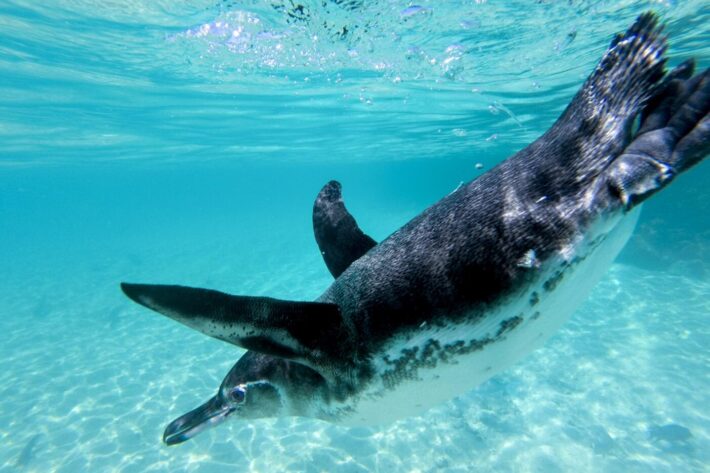 When is the best time to visit the Galapagos Islands?

If you want to save money and still want to travel to the Galapagos at an optimal travel time, you should choose the months of April, May, September and October for your vacation. These months are considered the low season in the Galapagos Islands and are therefore often cheaper. The cool season is particularly suitable for observing animals: giant tortoises, cormorants and penguins can be spotted on the islands. With the end of the rainy season in June, you have to expect many visitors to the Galapagos. Summer holidays and the main travel season fall between the end of June and August of the USA. In the months of September to November very few tourists visit the beautiful islands of Galapagos and animal lovers can observe the rare animal species undisturbed. However, the sea is particularly choppy at this time. Boat tours are unsuitable for vacationers suffering from seasickness. The cool temperatures and high waves can also make it too fresh and uncomfortable for divers.

Weather, climate and temperatures according to the season

The seasons are barely pronounced in the Galapagos Islands. A distinction is only made between the warm and the cool season. In the following section you will find all the important information about the climate, the weather and the temperatures during the two seasons.

The months of December to May are considered the warm season in the Galapagos with a tropical climate . The sun shines up to eight hours a day, but most of the precipitation falls during the months. In January it rains an average of seven days, in December you only have to reckon with two rainy days. Overall, the rainy season is moderate and does not deter tourists from visiting. On the contrary: the warm season is perfect for all sun worshipers , divers and snorkelers. The water temperatures are pleasantly warm with up to 27 degrees Celsius (March).

According to internetsailors, the cool season in the Galapagos begins in June and lasts through November. Cold air is brought in from the Antarctic, temperatures drop and fog must be expected. In contrast to the warm season, there is hardly any precipitation and the sun shines for five to six hours a day. In the months of September to November it is often particularly fresh, the water temperatures drop to 22 degrees Celsius. On the other hand, it is particularly quiet in the Galapagos at this time and vacationers have the island almost to themselves.

Monthly overview: Climate in the Galapagos

I have put together an overview for you, which informs you about the weather and climate in the different seasons. So you get all information at a glance.

December to May: Sunny days and warm temperatures

The months of December to May are the best travel time for sun worshipers, the sun shines for up to eight hours and the water temperatures are particularly warm at 24 to 27 degrees Celsius. The rainy season begins in January, with an average of more than 175 mm of precipitation per month. However, this time is not considered the classic rainy season. It doesn’t rain continuously, but mostly only once a day. In the warm but humid months there are more hours of sunshine than in the dry months . Due to the rain, the Galapagos Islands shine in a lush green. December to May are also the perfect months for animal viewing. The green sea turtle hatches and lays its eggs on the beach, and many other animals give birth to their offspring. The time is ideal for diving and snorkeling.

June, July and August: the end of the rainy season

June marks the transition to the dry season . The temperatures cool down slowly. In June the sun shines for up to eight hours, and in August for around six hours a day. Nevertheless, these months are considered a good time to travel to the Galapagos Islands. June heralds the end of the rainy season , precipitation falls only very rarely. Many tourists spend their summer holidays in July and August in the Galapagos Islands. The prices for flights and accommodation are rising. The sea is slowly cooling down and only reaches 22 degrees Celsius in August. A warming wetsuit is required for diving. The southern trade winds and the cool Humboldt Current can make it foggy at this time of year. Animal observations are hardly possible under the reduced visibility.

It gets coldest in the Galapagos between September and November, these months mark the low season . In September you can expect temperatures between 18 and 25 degrees. The sea is often rough with high waves . Boat tours are therefore only possible to a limited extent from September to November and nothing for people with seasickness. The months are also not well suited for snorkeling or diving. The water temperatures also drop to the annual minimum of 22 degrees. However, the Galapagos are relatively little visited during this travel time and there is hardly any rain . In September to November you have to expect two rainy days, otherwise it will stay dry.

My conclusion on the best travel time for the Galapagos Islands

The Galapagos Islands are a great travel destination at any time of the year due to their moderate temperature fluctuations . The main travel season is between December and May. The temperatures are the warmest, the sea is pleasantly warm and perfect for swimming, diving and snorkeling . The warm season is also ideal for observing animals. June and August mark the transition to the cooler season , but from August it will be significantly colder in the Galapagos. The southern trade wind shrouds the islands in fog on some days. Under these circumstances, animal observations are only possible to a limited extent. But at this time you have the islands almost to yourself and can explore the natural paradise undisturbed.

It’s best to add the Galapagos Islands as a year-round popular travel destination in your travel calendar . Curious? Then have a look at my travel magazine . You can find more inspiration there. Have fun!